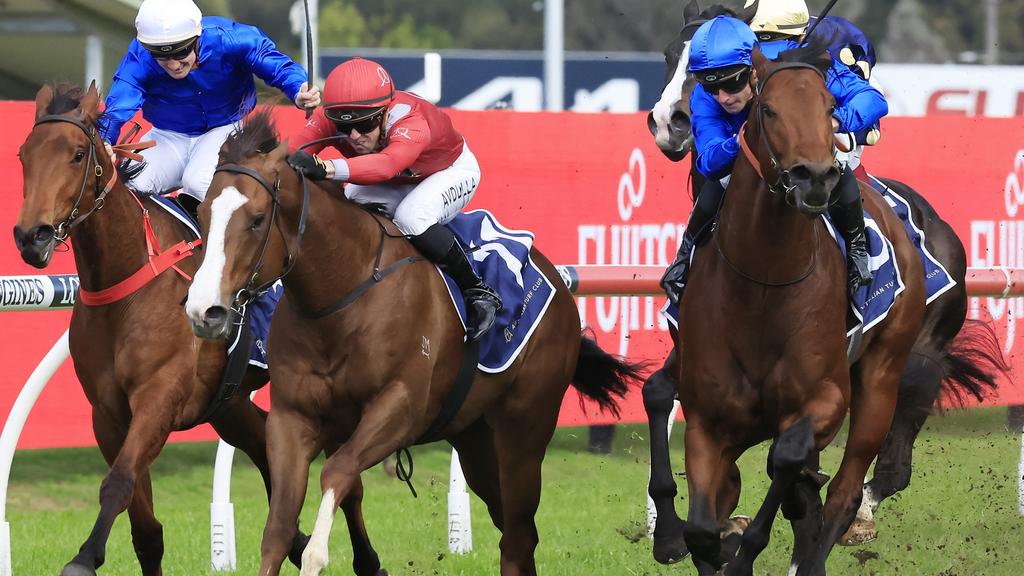 Zoukerino showed his class and resilience in navigating his way through traffic to record a strong victory.

Expertly ridden by leading hoop Brenton Avdulla, Zoukerino showed he was in the discussion of Sydney’s leading sprinting 3yo’s.

“There was a bit of tightening as he was trying to get through,’’ said John O’Shea, trainer of Zoukerino.

“That was a very, very good performance to do that at his second start and in very good company.

“He has had to overcome adversity to win. He’s always been a horse we have thought highly of, he’s a real colt, he’s the real deal!’’

O’Shea was entitled to speak glowingly of Zoukerino ($6.50) after edging out Godolphin’s Spacewalk ($4) to win in an exciting finish.

Troach ($11) led for home and held on for third, about a length behind the winner.

“Brenton has so much confidence in Zoukerino and he rode him beautifully, so patient, and backed his horse,’’ O’Shea said.

The race changed complexion a number of times in the straight.

There was almost five in line at the 200m with Troach on the inside, then in turn Zoukerino, Kibou, Sweet Ride and wide out Spacewalk with the latter seemingly finishing the strongest.

Spacewalk gained the ascendancy about 100m out and was starting to draw clear when he began to hang in badly, leaving jockey James McDonald to ride him virtually on one rein.

But as Spacewalk was ducking in sharply forcing McDonald to stop riding and take evasive action, Zoukerino had forced his way into the clear, built momentum quickly and wrested the lead near the line.

Zoukerino maintained the perfect start to his race career and is among a group of relatively unknown three-year-olds ready to upset the status quo with the established stars in the spring carnival, according to O’Shea.

“We have a few other bits and pieces we feel have come on because they didn’t have that hard autumn on the wet tracks,’’ O’Shea said.

“There’s a nice colt, Zou Tiger, in our stable and other horses I know of that are in the system, well-bred horses that were looked after last season.

“With Zoukerino, he wasn’t ready to start carving into Heavy 10 tracks in the autumn but we did get him to the races for a win late in his two-year-old season which is good for his profile.

“He came on so well from that win that I thought we should try and take the opportunity to get some black type early in his career.

“This was an important race for him to see if he made that transition and he’s done it well. We will get him home, see how he pulls up and play it be ear.’’

Zoukerino, by Snitzel out of Walk With Attitude, was bred by John Muir and sold for $500,000 to Suman Hedge Bloodstock at the Gold Coast June Yearling Sale last year.

The purchase price looks a bargain already with Zoukerino winning at stakes level at just his second career start and likely to be on the path to the Group 1 $1m Golden Rose next month.