Zion returns with a strong win at Bendigo 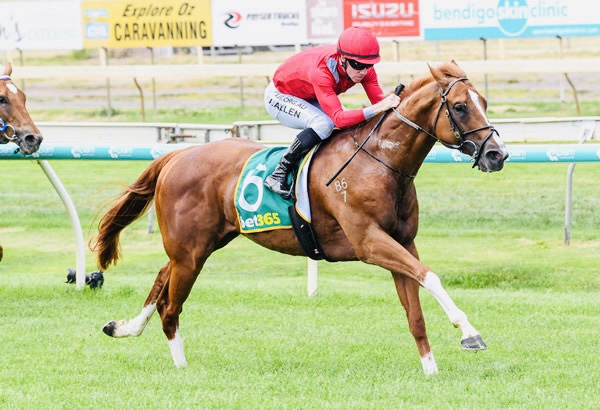 Talented galloper Zion (NZ) returned to racing on Thursday with a strong victory over 1000 metres at Bendigo.

The 3yo colt by Rubick was resuming from a break of 328 days after incurring an injury to a hind leg following a debut 5th placing at Canterbury.
After missing the start and being chopped out the Maher/Eustace trained colt ranged up at the top of the straight before accelerating sharply and defeating Galactus by 1.5 lengths with debutant El Fabio a further 2.75 lengths adrift in 3rd place.

Zion, a striking chestnut with four white feet and a blaze was a much-admired yearling when sold via the Waikato Stud draft at the 2019 New Zealand Premier Yearling Sale.

After a protracted bidding duel between Suman Hedge Bloodstock and Graeme Rogerson/Aquis the colt was knocked down to SHB for NZ$360,000.

“Zion is the most expensive yearling I’ve ever purchased, he was a beautifully balanced yearling and moved so well I just had to have him as he was a priority purchase,” said Suman Hedge.

An injury early to the colt has caused Hedge and partners some concern.

“He hurt a hind leg, and it was in an unusual position which just required a lot of time, his trainers Ciaron and David as well as their vet and staff have done a terrific job getting him back, and hopefully the worst is now behind us.”

The stable always held a decent opinion of the lightly raced son of Rubick.

“He was in the better group of 2yo’s before he debuted and the stable have always been positive about him. They will now just slowly take him through his grades and given he’s had time to furnish and mature we have a bright outlook for his future,” said Hedge.

Zion will next likely race at Moonee Valley in a 1000 metre BM64 event on the 18th of December.