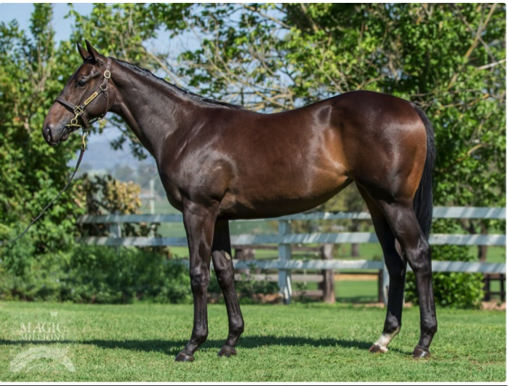 Suman Hedge Bloodstock is delighted to purchase the first foal of former outstanding 2yo Fontiton at the Magic Millions Premier Sale on the Gold Coast.

The athletic daughter of proven stallion Written Tycoon was offered by Newgate Farm and after strong competition was snapped up by leading Victorian trainer Mick Price.

After some post sale negotiations Suman Hedge Bloodstock acting on behalf of a group of former owners of Fontiton were able to buy into the filly who was knocked down for the bargain price of $200,000.

Trainer Mick Price was delighted to secure the filly.

“She is a nice strong type by a good proven sire, her dam was very talented and I also trained the grand dam who could also run, it’s a good family and at the money it was a no brainer,” said Price

The purchase was somewhat bittersweet with news Fontiton had died just days after the sale.

“Unfortunately, Fontiton suffered a severe bout of colic during the sale and succumbed a week after the sale after a second bout,” said Newgate Farm General Manager Bruce Slade

Fontiton was a special talent that raced for Matchem Racing and Champion Thoroughbreds Victoria.

The daughter of Turffontein was a brilliant 2yo winning on debut by 6 lengths before going on to also win the Group 2 Blue Diamond Prelude and Group 3 Blue Diamond Preview in an outstanding 6 start career.

Sent to stud after persistent injuries Fontiton left two live foals, this Written Tycoon filly, and a colt by champion stallion Snitzel. The mare was in foal to first season sire Russian Revolution at the time of her demise.

Written Tycoon the sire of this yearling has emerged as one of the very best stallions in the country. The son of Iglesia who was Champion First Season Sire has since gone on to sire Golden Slipper Winner Capitalist and Blue Diamond Stakes winner Written By.

Written Tycoon is now considered one of the best stallion’s in Australia and currently stands for $110,000 at his home at Woodside Park Stud in Victoria.

This filly being a daughter of one of Australia’s most sought after stallions and out of a brilliant multiple Group winner holds terrific residual value and at $200,000 appears a very safe purchase for her canny buyers.