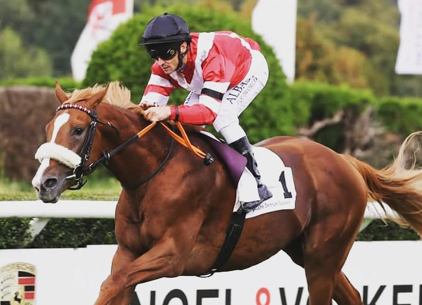 Suman Hedge Bloodstock is delighted to announce it has secured a majority interest in promising German 2yo colt Django Freeman in a deal co-brokered with HFTB Racing Agency.

The deal will see the son of Campanologist remain in Germany with trainer Henk Grewe and aimed at the Group 1 German Derby in July 2019 before being moved to Australia to be trained by Rob Hickmott.

Django Freeman has established himself as one of the best 2yo’s in Germany winning his first two starts and most recently finishing a narrow 2nd at Group 3 level.

“We’re excited to buy into Django Freeman and have the unique opportunity to race this talented colt in the German Derby before bringing him to Australia for his future racing,” said Suman Hedge

German counterpart Holger Faust is equally upbeat about the deal.

“This is a really interesting deal as Django Freeman is one of the highest rated 2yo’s in Germany and is currently on the 2nd line of betting for the German Derby. This arrangement allows the original owners Christoph Holschbach and Wilheim Baumgarten to retain ownership in a horse they have tremendous faith in, whilst allowing them and the new partners to also race overseas,” said Faust

At his next start in September Django Freeman displayed his immense raw talent bolting in by 3 ½ lengths in Dusseldorf over 1400 metres.

Django Freeman then rounded off his 2yo season with a narrow 2nd placing in the prestigious Group 3 Winterfavoriten over 1600 metres in Cologne.

It was this performance that cemented in Hedge’s mind that Django Freeman was the real deal.

“We had been following Django Freeman pretty closely but it was his last run which we felt was quite compelling from a future racing perspective and really forced us to step up our game to get into him,” said Hedge

“Our main brief is to try to find potential high class 2000 metre plus horses which Germany has a fine recent history of providing. With this horse being by Campanologist out of an Acatenango mare he is really bred stoutly but so far he has shown a good blend of natural speed and potential staying prowess.”

This is the 2nd recent deal between Suman Hedge Bloodstock and HFTB Racing Agency, and as with the previous purchase, Schabau, this horse will eventually be trained by dual Melbourne Cup winning trainer Rob Hickmott at Caulfield.

“Django Freeman is a classy 2yo who is bred to only get better with age and distance. This deal is terrific for both partners as the Australian owners get the chance to race in a big Group 1 in Germany and the German owners then get the chance to race for big prizemoney here in Australia. It is a win/win deal and I’m excited that I will eventually get to train him after the Derby,” said Hickmott.

Django Freeman is currently in work with Henk Grewe in Cologne and is slated to have 3 lead in runs before taking his place in the German Derby in July.