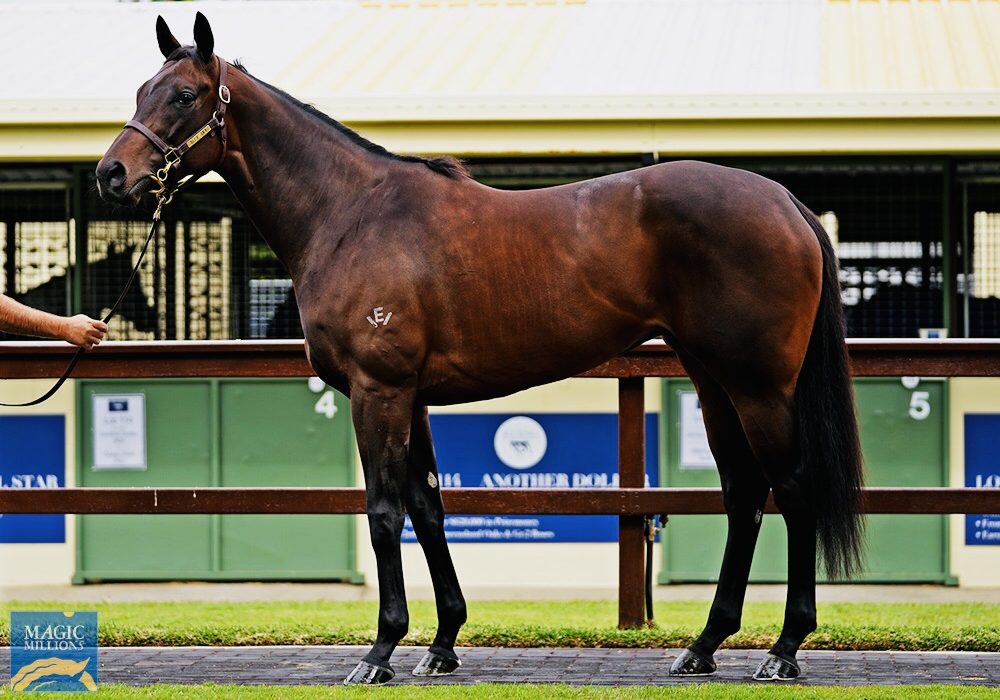 Suman Hedge Bloodstock was active at the Magic Millions National Sale with the company making its presence felt at the Broodmare, Weanling and Yearling sections of the sale.

In the broodmare section, the company kicked off purchasing LOT 69 a beautiful young mare named Shoulders for $300,000 in conjunction with Grant Bloodstock.

Shoulders is a placed mare, and a half-sister to the stakes-placed colt Aim and hails from a prolific family.
Grand dam Bollinger was a Group 1 winner and is already the mother of 2 individual stakes winners. Third dam Bint Marscay was the winner of the Group 1 Golden Slipper and is the dam of three individual stakes winners with daughter Mannington the dam of Group 1 VRC Derby winner Benicio.

SHB struck again on Lot 84 with the purchase of Tatcee a four-time winning mare by Foxwedge who was widely considered one of the best types in the sale.
This $300,000 purchase, again in combination with Grant Bloodstock came after fierce competition with a number of leading figures targeting the mare.

“Tatcee was my favourite mare in the sale in terms of her physique, and I was thrilled to be able to secure her for Grant Bloodstock. Steve Grant and Ken Lowe are new clients, and I feel very fortunate to be able to work in with them and their Farm Manager Rob Petith,” said Suman Hedge.

Once again Suman Hedge Bloodstock teamed up with Myrrh Australia and was active purchasing weanlings. At this sale, SHB partnered up with Grant Bloodstock and Milburn Creek in securing four weanlings.

Things kicked off with Lot 841 with Suman Hedge Bloodstock teaming up with Grant Bloodstock to secure a stunning brown colt by Lonhro from the Commands mare La Parisienne offered by Sledmere Stud for $150,000.

“We thought this was one of the very best colts in the sale; he is by Lonhro who has been such a quality stallion, has so much athleticism and quality in his physique and is from a good producing family, he was a high priority.”

“We thought this colt wasn’t expensive, his sire is a good source of winners, and his full brother has shown some early promise, we think he is an ideal type for buyers to secure and target an early 2yo race.”

Next up Suman Hedge Bloodstock paired with Milburn Creek to secure Lot 974 an athletic colt by Dundeel from the Fastnet Rock mare Ten to Midnight offered by Canning Downs Stud for $80,000.

“This was an understated horse that should improve, his sire looks promising, and we always back Milburn Creek to get the best out of horses so we look forward to what he can do.”

Suman Hedge Bloodstock finalised its purchases at the weanling sale buying a Lot 1053 with Grant Bloodstock; a colt by young Arrowfield Stud stallion Shalaa offered by Milburn Creek for $100,000.

“Time will tell, but I really felt we bought well with this horse, he is such a strong well-grown and athletic horse, we love his sire, and I think with his physique and movement he will hold a lot of appeal to trainers, can’t wait to sell him.”

In the yearling section of the sale, Suman Hedge Bloodstock continued its emerging relationship with the Mick Price/Michael Kent stable purchasing an imposing colt by proven NZ based stallion Redwood offered by Westbury Stud for $110,000.

“This colt held a lot of appeal as physically he was lovely, strong and correct and good on the walk and he also is a full brother to Swampland who has shown a lot of ability in Melbourne and is a multiple Group placegetter.”

Hedge was very happy to again link up with one of his favourite training teams.

“We were delighted to have the opportunity to work in with the Price/Kent stable at this sale. This year we bought three other yearlings with them, and it is such an advantage to buy horses with great judges of yearlings and even better trainers.”