Myrrh Australia clean up on Coast 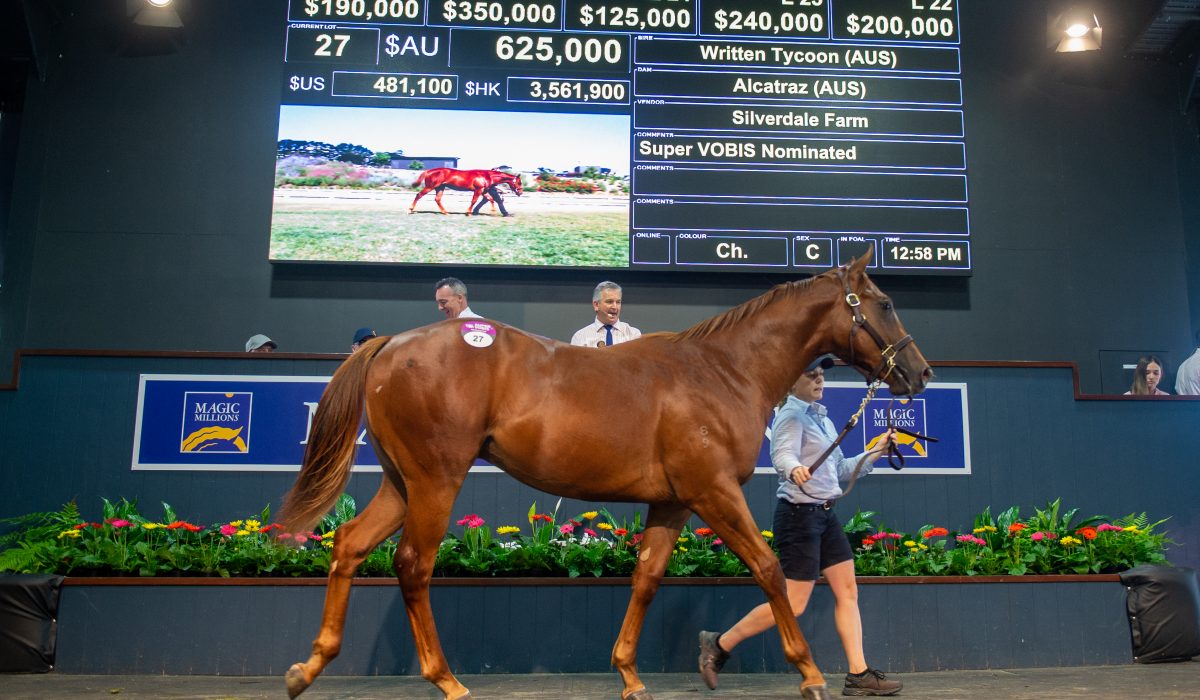 The first yearling offered was LOT 27 a colt by Written Tycoon x Alcatraz offered by Silverdale Farm which was purchased by James Bester and Coolmore Australia for $625,000.

This racy type was purchased privately for $200,000 in conjunction with the breeder – Two Bays Farm and represented an excellent return on investment.
Next up – Silverdale offered LOT 143, an athletic colt by promising young stallion Shalaa from the winning Fastnet Rock mare Cashla Bay, which sold to leading Victorian training partnership Mick Price/Michael Kent Racing for $150,000.

Whilst not a positive financial result for Myrrh Australia ($100,000 weanling purchase), this was perhaps unlucky as if the colt sold after the 2021 Magic Millions was run and won by Shalaa colt Shaquero this could have been a much better outcome.

The third horse sold by Myrrh Australia was a precocious colt by First Season Sire Extreme Choice offered by Milburn Creek who sold for $400,000 to Ciaron Maher Bloodstock.

This colt proved very popular with a variety of trainers and was widely inspected with Maher emerging victorious after a spirited bidding duel with Sydney trainer John O’Shea. This colt was privately purchased in conjunction with breeder Aquis Farm for $100,000 and was another excellent return for the group.
LOT 705, the final yearling offered by Myrrh Australia was a daughter of Not a Single Doubt from the Success Express mare Rhodamine who sold to the powerful Gai Waterhouse/Adrian Bott training partnership in Sydney for $750,000.

This stunning filly was one of the most inspected lots in the entire sale with numerous x-ray hits. Beautifully prepared by Silverdale Farm, the filly represented an excellent return off her $280,000 weanling purchase.

All up the yearlings sold on behalf of Myrrh Australia sold for $1,925,000 from an initial outlay of $680,000 offering an excellent return on investment.
With 3 yearlings left to sell the group is in excellent shape to record another healthy profit.

“We’ve had a strong start and I could not be happier for my loyal supporters who stuck solid through COVID and have been rewarded with excellent results.”

“Magic Millions deserve a lot of credit for organising a great sale in the most difficult and uncertain times and our partners Silverdale and Milburn Creek have done a wonderful job preparing and selling these horses and garnering a terrific return for our investment group,” said Hedge.